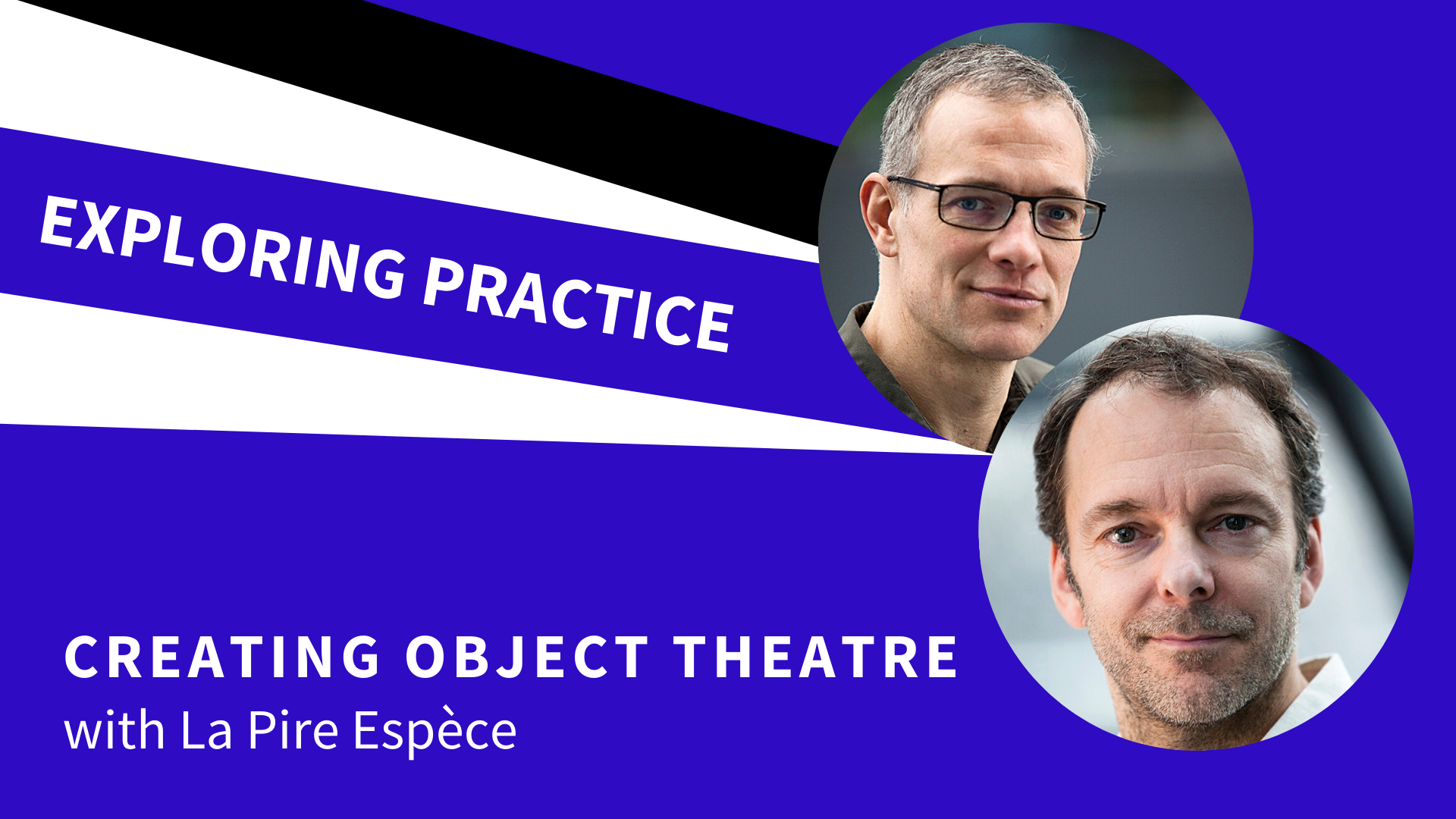 Note:
Due to its hands-on approach, this workshop will be held physically in accordance to PWM’s COVID-19 safety procedures. Contact harris@playwrights.ca for any questions about the workshop.

Open to playwrights, puppeteers and other theatre creators, this bilingual four-day workshop led by Olivier Ducas and Francis Monty, co-artistic directors of the Théâtre de la Pire Espèce will guide participants through a creative process where image and text intermingle, a process in which the form emerges from the tension between all simultaneously examined scenic elements.

The unique form of object theatre is built around three key aspects: clear and poetic language, the possibilities of the object itself, and the actor’s performance, both manipulator and storyteller. Through hands-on exercises and practical discussions, La Pire Espèce will immerse you in the exciting, specialized and minimalist art of object theatre.

Creating Object Theatre is presented in collaboration with the Association québécoise des marionnettistes (AQM). The workshop is open to playwrights, puppeteers, performers and interdisciplinary creators. Members of the AQM are encouraged to apply. Please note that this is a hands-on workshop with some performance-based exercises. The workshop will be led bilingually in English and French, participants will be encouraged to express themselves in either language.

Apply before noon on May 25, 2021 to ensure that your application will be considered.

About the Workshop Leaders

Olivier Ducas studied acting at the National Theatre School of Canada. His decisive encounter with Francis Monty led in 1999 to the founding of Théâtre de la Pire Espèce, for which they act as co-artistic director. He also cofounded Théâtre Aux Écuries (2005) a creation center and theatre venue in Montreal and was one of Carte Premiere’s initiators. A playwright, actor, director and object/puppet manipulator, he is the co-creator of the company’s productions (Ubu on the Table, Perseus, Gestes impies et rites sacrés, Die Reise, Futur intérieur and L’Effet Hyde) that have toured across Canada, Europe, Mexico and Brazil over the last 20 years. In 2008, he single-handedly wrote and directed Roland, la vérité du vainqueur, a show for two actor-storytellers for teen audiences. In 2014, he repeated the experience with Cities, adding solo performer to his list of credits. He is currently working on the Contes zen du potager, a series of short, minimalist forms, where vegetables display all their substance. Ducas is a leading object theatre director in Canada. Research in object and image-based playwriting is at the core of his actions as a creator. In addition to his creative work, Ducas also gives object theatre classes for professionals, theatre school professors and theatre students.

A 1997 graduate of the playwrighting program at the National Theatre School of Canada, Francis Monty is a theatrical jack of all trades – directing, clowning, puppetry and his many writing projects all intertwine. In 1999 he co-founded Théâtre de la Pire Espèce with Olivier Ducas, and both share the position of artistic director. He has co-created many of the company’s plays, including Ubu on the table and Perseus. A number of his plays have travelled across Canada, and to Brazil and Europe, including Par les temps qui rouillent, Déclownestration, Traces de cloune, Léon le nul, Ernest T., Petit bonhomme en papier carbone and Nous sommes mille en équilibre fragile. He received the 2005 Masque award for best original script for Romances et karaoké, the 2014 Cochon dramatique for best original script for Petit bonhomme en papier carbone at the Gala des Cochons d’or and Ernest T. was nominated for best original script for young audiences for the Louise LaHaye Award.

WITH THE collaboration of

This workshop is financially supported by

PWM is located on unceded Kanien’kehà:ka/People of the Flint (Mohawk Nation) territory. Tiohtià:ke/Broken in two (Montreal) is historically and presently a gathering place for many First Nations.